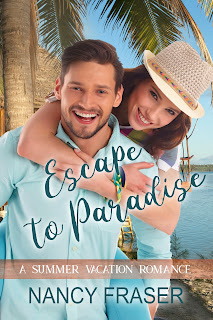 Allison (Ali) Dow, thirty-two, is a driven corporate attorney who harbors the worst fear of commitment known to man (or woman). With two failed engagements under her belt, the last thing she wants is the distraction of another man unable to handle her professional success.

Jace Bailey, thirty-three, is the new head of security for Tech Savvy Apps, Inc. After ten years as a member of the military police, Jace had always planned to return to the family business once he’s discharged. However, when a good friend and former mentor recommends him for a job in corporate security, he jumps at the chance to remain a ‘protector’.

His first major off-campus assignment requires him to escort his employer’s corporate attorney to the island paradise of Grand Cayman to close a major business deal. The job should be simple until he realizes the attorney in question is the woman known around the TSS watercooler as ‘Viper’. Unfortunately, their routine business trip turns into a game of cat and mouse with a handful of corporate spies.

Can these two distinctly different individuals navigate their growing attraction while still keeping themselves and those around them safe? And, once they’re back on their home turf, will they find a way to make their relationship work, despite their differences?

The only thing intruding on his idyllic life is the realization that the majority of his closest friends have married, and had children, which seriously impacts his Sunday football parties with the guys.

Haley Charles is the newly hired project manager at Pierce and McKenna, Architects, one of the city’s most prestigious firms. At twenty-eight, she’s the youngest member of the management team, and determined to make a good impression on the bosses.

When a rush request comes in from one of the firms most valued clients, Mitch has to cover for his honeymooning partner. With the majority of the staff already assigned to ongoing jobs, he finds himself working overtime with the new, and disturbingly attractive, project manager.

Will the late nights and a few shared kisses have him rethinking his bachelor status? Or, is he truly going to be ‘the last man standing’?