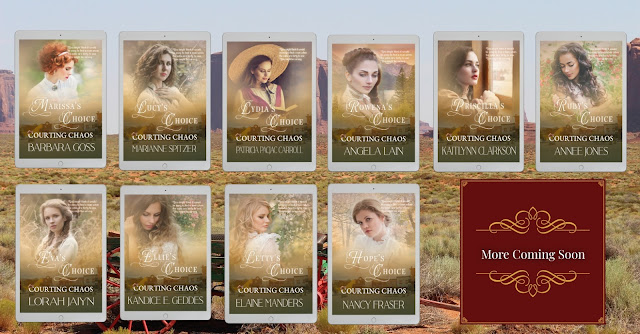 A Bit About the Series

You might think it would be easy to find a man when the odds are forty to one. You might be wrong.

A young woman finds herself in a small western town devoid of single women. As you can imagine she is swarmed with offers but there are three men who are serious contenders. Once she decides to marry she has to decide which one it will be. The challenge for the reader will by to figure out which lucky man will win her hand. Can you do it?

About Book #1 in the Series 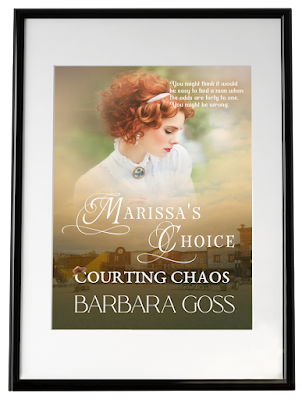 "Choose your love and love your choice.”

A pretty, single woman in the Old West where there is a shortage of women, would surely cause heads to turn, as well as garner some serious suitors. As soon as Marissa steps off the stage, every man in Hunter’s Grove is mesmerized. Three likely suitors are bold enough to throw their hats in the ring for her attention: Cole, her aunt’s attorney, Alan, her farmer neighbor, and Nash, a neighboring sheep ranch owner. Since her aunt left an unusual stipulation to her will, Marissa finds herself forced to choose one of them to marry. Which one will she choose? She vowed she’d not marry unless she was in love with one of them, otherwise she’d return home to Pennsylvania.

A knock on the front door startled Marissa from her thoughts, and she welcomed the attorney, Cole Atkins. He carried a case, which she imagined held legal papers. 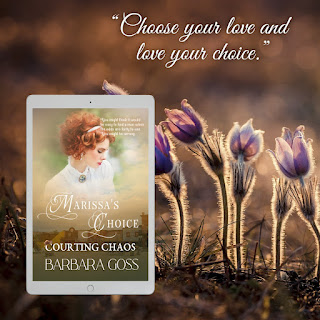 After exchanging cordial greetings, she led him to the sitting room. “Would you like tea or coffee?” she asked.

“Neither. I’ve had my fill of both today. Let’s get down to business.” He sat in a chair near the settee where she’d taken a seat, and he opened his case, pulled out several papers, and cleared his throat. “Your aunt left the ranch and all her money to you, but there is a rather odd stipulation attached to it.”

Marissa cocked her head at him. “What kind of stipulation?”

“Well, Agnes wants you to have everything but not right away.”

“I don’t understand,” she said, wondering why the attorney looked uncomfortable. She began to worry. “Please, explain it to me.”

“She wants me to hold onto the ranch and her money until you marry,” he said bluntly.

“What? I don’t even know anyone here.”

“Once word gets around, you’ll have men wanting to court you, trust me. This is a valuable piece of property, and you probably have thousands of dollars in cattle grazing in your pasture. You will be a very wealthy young lady. And heaven knows you are the only single woman of marriageable age in town.”

Marissa didn’t know what to say. She was shocked and surprised that her aunt would make such a stipulation to her will. Marissa hadn’t even thought of marriage, and she’d never been courted. She’d spent most of her time nursing her mother, and even if she hadn’t been busy, there were few men in their Pennsylvania town she’d have wanted to marry. So, now she was being forced into marriage?

Barbara Goss lives in Western New York and to date has written 50 Christian and/or Sweet Romance books, mostly westerns. She enjoys crossword puzzles, penny slots, reading, swimming, and her two cats, but not necessarily in that order. She tries to write exciting stories with a bit of God's word spread within, without dominating the story.


Barbara began writing in 1988 and her first book, Forbidden Legacy, won first prize for fiction at a Christian Writers Convention in Titusville, Florida in 1989. This won her a book contract with Publishers: Fleming Revell and later Baker Books. She wrote four books for them under contract. She then took a few years off to work full time as a secretary to the county hospital and the local school system.

Barbara's greatest influence in writing is the 100 books written by Grace Livingston Hill. As a Christian writer, she weaves a bit of godliness into the romance and adventure yet her books are always clean. Barbara is well on her way to catching up to Ms. Livingston.

Thank you for joining us for this launch of the first book in the series. Please come back again soon for more featured authors and more great books!