Welcome to Romance Sweet Reads! Today, we’ll be featuring Rachael's Claim, by author Linda Baten Johnson, the fifth book in the new Land Run Mail-Order Brides multi-author series. Over the course of the next few weeks, we will be sharing all twelve books in this wonderful new sweet/inspirational, western historical romance series set among the Oklahoma Land Runs from the late 1800s. Sit back, and enjoy a sneak peek! 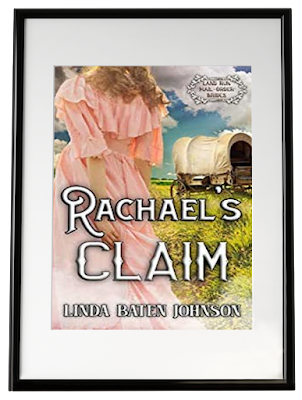 As arable farmland grows scarce, the United States opens up former sections of Indian Territory for homesteading. Those who want to claim land must make a run for it.

Rachael, wearing trousers and sitting astride a spirited horse, pulled the floppy hat lower to disguise her face. She could ride and shoot, but she’d also need nerve and luck. The newspaper estimated over a hundred thousand men and a few foolhardy women would rush into Oklahoma territory in wagons, on horses, bicycles, and by foot when the cannon boomed at noon. Even a train, packed with people ready to jump off, waited for the signal. The Oklahoma Land Run of 1893 held only forty-two thousand plots, so more than half the hopeful settlers would be disappointed. Rachael could not be in that group.

Jess Hunter thrashed with alternating chills and fever and called for water. When he received no response, he struggled to sit up. Rachael was gone. His friends had ribbed him about writing for a mail-order bride. He should have listened. Jess looked around the shack. His claim stake was gone! He struggled to his feet and whistled for his horse. No familiar whinny answered, and Dandy wasn’t in the pasture. Was she a horse thief too? He vowed to track her down—just before he passed out.
Available exclusively on Kindle Unlimited.

“Oh Papa, I’m sorry you’ve shouldered this burden alone. You rest. I’ll make toast and jam, then we can plan.” She went to the kitchen with two goals—making tea and deciding how to avoid marriage to her father’s fifty-year-old friend. 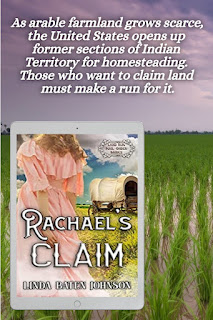 The letterbox clanged, and Rachel left the tea steeping to check the post. How could she have been so obtuse? She grimaced as she spied a cream embossed card from Mr. Crenshaw and then looked at the newspaper.

The bold headline screamed: KANSAS MEN DESPERATE FOR WOMEN. She laughed, thinking she was a Michigan woman desperate for a man.

While toasting the bread, Rachael read the article about ten Kansas men who wanted mail-order brides. The newspaper sponsored the matchmaking endeavor and would be paying the potential bride's fare west. The Kansas men selected all planned to participate in the Oklahoma Land Run in September of 1893 and professed to want wives to start a new life with them. Descriptions of the ten men followed. The article stated all interested women should reply to the newspaper office. The editor would notify the women selected before September 1.

When she took the tea tray to the parlor, Papa snored softly. If she had to marry, she'd prefer a young Kansas stranger than her father's old, fat friend who smelled of rheumy rubbing oil and hair wax. She selected stationary from the secretarial desk.

Linda Baten Johnson grew up in White Deer, Texas, where she won blue ribbons for storytelling. She still loves spinning tales. A tornado destroyed the town when Linda lived there, and watching faith-based actions in rebuilding lives and homes after the tragedy influences her writing. Her historical fiction books for young readers and her squeaky-clean romances are available in print, e-book, and on audio.
Linda's Website ~ Amazon Author Page 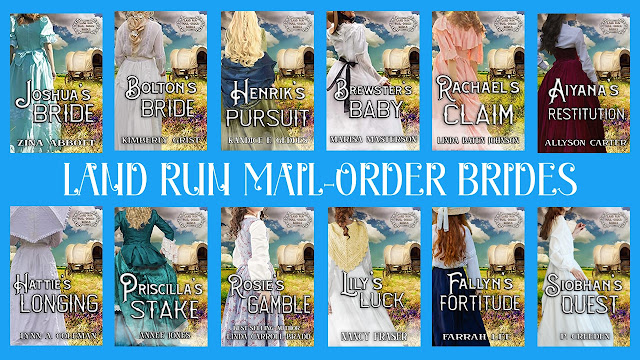 Oklahoma’s Land Runs began on April 22, 1889. There would be five land runs with the last one taking place on May 23, 1895. Each book in the series is set around one of these land runs.

You can find all twelve books in this series on Kindle Unlimited.

Thank you so much for stopping by. Please come back again all next week for more talented authors and great books.