Romance Sweet Reads is pleased to welcome author Barbara Goss to the blog to talk about her book, Conner’s Contrary Bride, the very first book in the Matchmaker’s Mix-Up series. 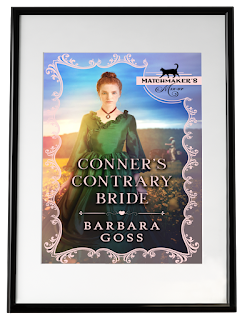 “They were as different as a moonbeam from lightning, or frost from fire.”

Elsie Crenshaw of Gobbler's Knob, West Virginia, runs from a cruel stepfather to take refuge with a widow who introduces her to a successful matchmaker. Elsie, having no family, feels the need of a protector after what she endured from her stepfather. Elsie gives the matchmaking ad a try.

Dr. Conner Beauregard Van Gates the IV, has lost his wife during childbirth. He lost his successful practice in Missouri and moves to Hays City, Kansas. After two years, he finds himself lonely and needing help running his clinic. His faithful housekeeper talks him into trying the matchmaking service.

How could either Elsie or Conner know a naughty cat messed up all the matchmaker’s matches? How could Conner put up with such a contrary bride? How do bank robbers and the evil stepfather bring them to realize opposites can attract?

Conner and Elsie were cleaning up after a busy day and were preparing to close the clinic for the day when some men on horses galloped up to the clinic and came storming in. “Doc, my brother here’s been shot.” 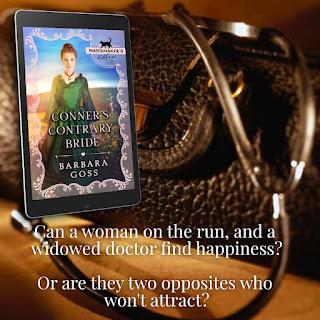 Conner patted the closest bed, as cool as ever. “Bring him over.”

The two other men half-walked, half-carried the man whose chest was bloody and his face looked pale as death. Elsie knew enough from working in the clinic it didn’t look good.

Once on the bed, Conner ripped the man’s shirt open to examine the wound, while the other two watched anxiously.

“The bullet,” Conner told them, “is near the heart. I know it couldn’t have hit his heart, or he’d be dead by now. The bad news is I must operate to remove the bullet, and being so close to the heart, it’s a dangerous procedure.”

“Well,” the tallest of the scruffy men said, “we’ll take your assistant here, as collateral.” The man grabbed Elsie and held her in front of him. “If Mac dies, we kill her.” The man held a knife to Elsie’s throat. “So, Doc, you’d better make sure my brother lives.”

Elsie trembled in fear. The man’s hands were rough, and her arms hurt from his grip on her as he held the icy blade of his knife to her throat. She hadn’t prayed in years, but what else could a human in trouble do but pray? If there was a God, He’d help her. She thought about what she’d gleaned from the Sunday sermons that she’d pretended not to hear. She could still recall Reverend McDougal once say something like, “I will protect him who acknowledges my name.”

Barbara Goss lives in Western New York and to date has written 50 Christian and/or Sweet Romance books, mostly westerns. She enjoys crossword puzzles, penny slots, reading, swimming, and her two cats, but not necessarily in that order. She tries to write exciting stories with a bit of God's word spread within, without dominating the story.

Barbara began writing in 1988 and her first book, Forbidden Legacy, won first prize for fiction at a Christian Writers Convention in Titusville, Florida in 1989. This won her a book contract with Publishers: Fleming Revell and later Baker Books. She wrote four books for them under contract. She then took a few years off to work full time as a secretary to the county hospital and the local school system.

Barbara's greatest influence in writing is the 100 books written by Grace Livingston Hill. As a Christian writer, she weaves a bit of godliness into the romance and adventure yet her books are always clean. Barbara is well on her way to catching up to Ms. Livingston.

Thank you so much for joining us today. We’ll be back again on Thursday and Friday with more books from this great series.