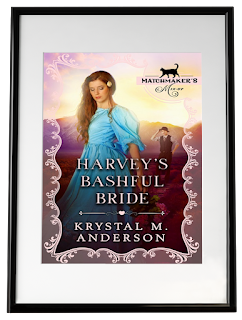 In theory, sending for a bride through a Matchmaker was a sound plan. In reality, it couldn't have been more disastrous...

As Cottonwood Creek's newly elected Mayor, Harvey Dennett is in need of a bride. Utilizing Chicago's most successful matchmaker certainly seemed like the answer to all his problems, but when Martha, his wife-to-be, faints the minute she arrives, he wonders whether he made a giant mistake.

Bashful Martha, on the other hand, is happy for her change in circumstance but unaccustomed to the wilds of her new frontier home. When a string of robberies plague the citizens of Cottonwood Creek, Martha enlists the help of two stalwart friends to conquer the threat, endearing her to the people of the town. Will her efforts be enough to win the heart of her husband? 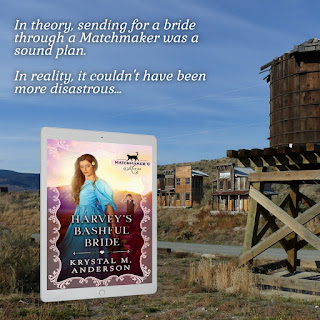 A movement from the coach’s dim interior alerted Harvey that someone was still inside… but was it she? Two round midnight-blue eyes peered out and disappeared with what sounded like a squeak.

Hesitantly, as though afraid someone in the crowd would pounce, the eyes appeared once more, followed by a head of crimson curls that had been pinned up. Slim shoulders covered in drab brown material were enough to reveal the woman still half-concealed within the coach. She seemed frozen in place except for the rapid rise and fall of her chest. Impossibly, her sizable eyes widened as they took in the gathering, darting from face to confused face until the pallid color of her skin whitened even more.

Her gaze snapped to his, she opened her mouth but no sound came out before her irises rolled to the top of her head and her body went limp, tumbling out of the stagecoach and into her bewildered groom’s arms. 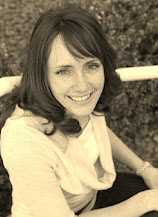 Krystal M. Anderson is a Utah, USA native and a wife and mother of four young children, including a set of twins. She grew up on horseback and treasures any time spent riding through the red sands and sagebrush, always yearning to find out what is over the next ridge.

Nothing makes her happier than being a wife and mother... but reading is a very close second!

Get the entire Matchmaker’s Mix-Up Series on Amazon

Thank you for joining us today for another peek at a great book in this series. Please feel free to scroll back through previous posts to see more on this series. And, don’t forget to come back again soon.