It's always fun to celebrate a Book Birthday with my friends and fellow authors. However, it's even better with the Book Birthday is mine! I do have to admit, I am a day late with my celebration. The book actually released yesterday but, since I was already hosting another author, I didn't want her to have to share the spotlight! 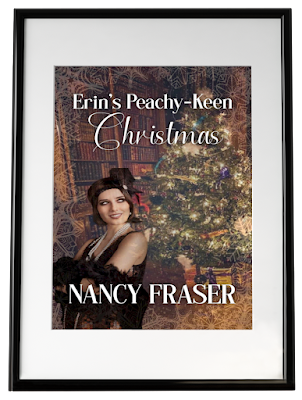 Caught in a raid at an illegal speakeasy, good girl Erin O'Mara loses everything: her job, her home, and her reputation. Handsome and so out of her league attorney Alexander Harrison, her best friend's brother, rescues her not once, but twice. He bails her out of jail and offers her a job as nanny for his son.

Alex has no intention of falling in love after the death of his wife. But despite his better judgment, he can't help being drawn to Erin's innocence. This Christmas, letting go of the past and embracing the future may be the greatest present of all.
Get Erin's Peachy-Keen Christmas exclusively on Kindle Unlimited

“Well, well, well, what have we here?” The desk sergeant stared down over the huge wooden barrier, his thick Irish brogue filled with amusement. “Miss Harrison, Mr. Packard.” Glancing in Erin’s direction, he added, “Don’t tell me these two have roped another of their Hyde Park friends into skirting the law?” He shook his head and rubbed a meaty hand across his whiskers. “What’s your name, girlie?”

“Saints be, they’ve drawn a fine Irish lass such as yourself into their sordid business.” The officer turned his attention to Abby. “I suppose you’ll be wanting to call that shyster brother of yours, now won’t you?” 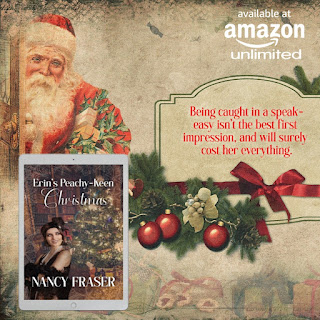 O’Malley motioned toward the single phone on the table opposite the desk. “You can give him a call, but you’re going into the tank with the rest of the lawbreakers until he gets here. No more special treatment just ‘cause your father’s a councilman. Understood?”

“Yes, sir,” Abby said. She started toward the desk and then turned back to ask, “Did Mrs. O’Malley have that baby yet, Sergeant?”

“Not yet,” the man acknowledged, shaking his head. “You’d think after ten, they’d just walk out on their own.”

The “tank” as Officer O’Malley had called it was made up of three jail cells, side by side. Women were housed in the first, the middle one sat empty, and the men were placed in the third.

The young officer in charge of escorting them to their cells opened the door and motioned them forward. “Miss Abby,” the man said, “I’m surprised to see you back so soon.” Abby laid her hand against the officer’s smooth cheek.

“Oh, Tommy, you know I couldn’t possibly go more than a week or two without seeing your handsome face.”

The cell door had barely shut behind them when two women of questionable virtue began whistling and making wild moaning noises. The older of the two laughed heartily, her amusement ending in a rough-edged cough. “Oh, Tommy,” she whimpered, “I missed you so much.”

“Leave it alone, Kitty,” Officer Tommy warned. “And don’t you be trying to steal anything from these two young ladies.”

The woman called Kitty shook her head. “Don’t want nothing from these swells, Tommy-boy, ‘cept maybe a ciggy if they’ve got one.”

“Well, la-de-da, aren’t you a couple of good girlies?” 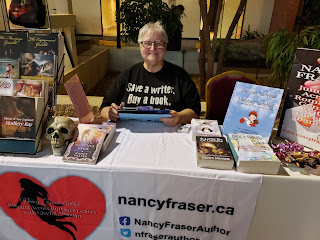 When not writing (which is almost never), Nancy dotes on her five wonderful grandchildren and looks forward to traveling and reading when time permits. Nancy lives in Atlantic Canada where she enjoys the relaxed pace and colorful people.

Erin's Peachy-Keen Christmas is the first book in my new Holding Out for a Hero series. What woman doesn't wish for a hero, whether it's a sheriff in the old west, a solicitor in the 1920s, or even a sexy professor in modern day.
Book number two, An Honorable Man for Katarina, comes out December 6, 2022.
Cold Creek, Colorado Territory ~ July, 1856 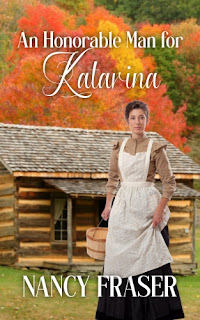 Katarina (Katy) Anderson has experienced more heartache in her twenty-two years than most know in a lifetime. Given to a man old enough to be her father, she has spent the past six years secluded from everyone except for her three young children. Her husband’s untimely death brings relief that... finally... she and her children are free.

When Sheriff Matthew Logan arrives at the Anderson homestead, he is moved by Katy’s sad circumstances and vows to right the wrongs done to her. He’s always shied away from marriage due to his dangerous profession, yet he quickly changes his mind when Katy and her children come into his life, and into his heart.

Once her faith in the Almighty had been restored, can Katy overcome her issues of trust and take a chance on true love?

You can preorder An Honorable Man for Katarina on Kindle Unlimited
~ ~ ~
Please come back again soon for more books, authors, and great company.
Blessings,
Nancy
at November 15, 2021