Today’s featured story is A Christmas Kiss for Kate by author Wren McCready. 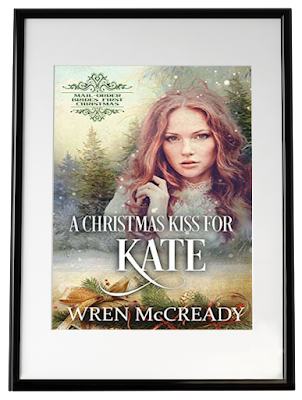 Tortured with guilt over his first wife’s death, Chase Mayer closed his heart, leaving only a little room for his daughter Pearl. But Pearl is growing up, and even though Chase can’t imagine marrying for love, he knows Pearl needs a mother — even if it means buying a newspaper ad to find one.

Kate Doyle gave up any hope of having a family of her own when her mother died. When Kate’s brother plays matchmaker, she finds herself agreeing to marry a stranger. The expansive Wyoming Territory couldn’t be more different from her rough Chicago neighborhood, and the hardworking, generous Chase couldn’t be more different from her abusive father.

Despite a fresh start, the wounds of their past aren’t easily forgotten. Kate and Chase struggle to bring their two fragmented families together during the Christmas holiday and discover the healing power of love along the way.

Get A Christmas Kiss for Kate on Kindle Unlimited

“I let my wife die, alone. My daughter almost starved to death before I made it back.” His voice was low, as if he could barely force the words out. 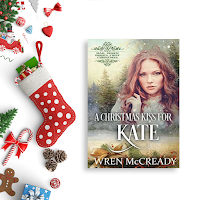 “Does blaming yourself for that every day make you a better father? A better man? No, it makes you selfish!” Kate heard the words flying out of her mouth, but she didn’t know where they were coming from. Maybe it was all bound up in the words she wanted to scream at her father for so long after Ma’s death. “Lula’s misery was her choice. She had everything: a beautiful daughter, a comfortable home, and a good, strong, kind husband —”

Chase opened his mouth, but Kate was too full of fury to let him speak.

“ — just like you closing your heart to love is your choice!”
She was panting and her face was so hot, she wanted to unbutton her coat. Had she really just said those things? A tight knot of rebellion burned in her throat. Well, foot, what if she had? After they found Pearl and Mary, he could throw them all out in the snow if he wanted, but someone had to tell him the truth.

His expression was as blank as the snow at their feet as he looked at her. Was he angry? She couldn’t tell —

Somewhere nearby, a wolf’s howl and a little girl’s screams pierced the sky.

Wren received her degree in English lit. from Oral Roberts University, and has lived in Arizona, Oklahoma, and Texas. She now resides in a small, gold-rush era town in California's Sierra foothills. At one time, her great-great-grandfather owned the largest cattle ranch in Kansas, and she spent many happy hours with her grandparents at their home in Wichita, listening to tales of prairie life. The two greatest influences on her writing are Laura Ingalls Wilder and Jane Austen.

Wren has four children: Charlie, Maggie, Nora, and Jude, and two amazing granddaughters. She also has innumerable cats, most of who seem to know when she's writing, and demand to be pet at the same time. (Seriously, that is happening right now.)

She likes to quilt, is currently trying to teach herself to knit, and tries to keep things alive in her garden. She doesn't particularly like to cook, although she understands she must try, as food is essential to her family's continued existence on this planet.

Just in time for the holiday season, wonderfully romantic books from some of your favorite authors. A whole stocking full of heartfelt happily-ever-afters!

~ ~ ~
Thank you so much for joining us today. We invite you to come back every release day to get a sneak peak at the individual books, as well as the occasional exclusive excerpt available only here at Romance Sweet Reads.