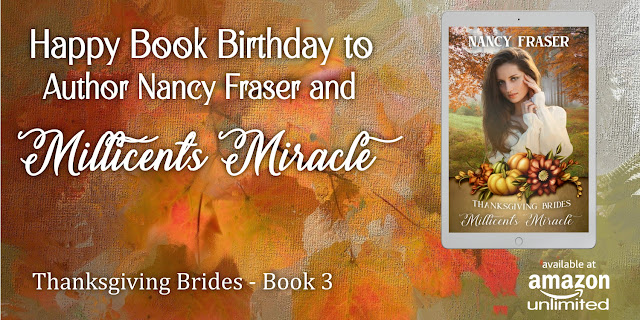 Welcome back to Romance Sweet Reads. Today we’re featuring another new sweet/inspirational romance series, Thanksgiving Brides. The series is historical/western historical set prior to the 1900s.

We’ll be continuing with the third book in the series, Millicent's Miracle, by author Nancy Fraser. Millicent's Miracle is the prequel to an Oregon Trail story Nancy published earlier this year titled, Ella (Prairie Roses Collection). In the new book, we'll get to explore Ella's brother Connor's romance with Millicent, and get to reconnect with Ella and her children. Here’s your sneak peek at Millicent's Miracle... 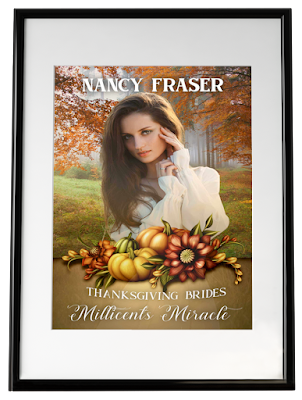 Millicent (Millie) Carter is beside herself. Pawned off by her uncaring father, after her mother’s passing, the last thing Millie wants is to be stuck in some small town in the middle of nowhere. What she wants is to return to Chicago and the life she’s known there. Despite her misgivings, she finds the kindness she experiences with her aunt and uncle more tolerable than she expected. As a matter of fact, she doesn’t even mind returning to church, something she’d not done since her mother took ill.

Connor Miller is doing his best to revitalize and run the family’s farm and continue his job as the area’s only wainwright. Both his parents are gone, leaving him in charge of more than he’s prepared to handle. He’s also taken in his widowed sister and her three children following her husband’s questionable demise. Scandal has followed the family for as long as he can remember. First his father, and now his sister’s late husband. With only his strong faith to keep him going, he trudges on.

When Connor and Millie meet, there is an immediate awareness. Yet, Connor knows he has no time to devote to courting, no matter how badly he wants to settle down with a wife and family of his own. For Millie, the handsome farmer is far preferable to the older men her uncle has introduced her to through his congregation.

Perhaps there’s an agreement to be made. Or, will they both let their feelings pass in favor of their obligations?
Available exclusive in eBook on Kindle Unlimited
Also available in Print

Millicent Carter turned full-circle in the ornate dining room of her family home. Hands planted firmly on her slender hips, she dared to shoot her father a stormy glare. “But... Papa... please—”

“You’ll do as you’re told,” Millie’s father insisted. “And go where you’re told. That’s my final word on it.”

“I don’t want to leave Chicago,” she insisted. “I’ve no desire to live in some backwater town in... um... Missouri of all places. They probably don’t even have indoor plumbing.” 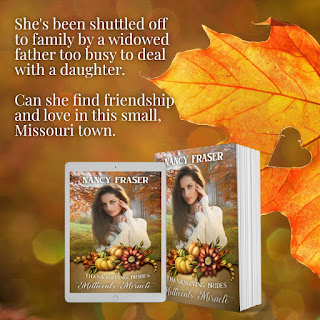 Sylvester Carter huffed loudly, his handlebar mustache lifting and falling with the exaggerated response. “Don’t be so melodramatic, young lady. Of course, your aunt and uncle have indoor plumbing. Perhaps not as luxurious as that fancy marble your mother demanded, but adequate all the same.”

“What about my friends? My studies?”

“Your studies were an indulgence after finishing school. They’re not necessary. It’s not like you’ll ever have to work for a living. As for your friends, they’re one of the reasons I’m sending you away. I believe they’ve become a bad influence on you.”

“I’m not a child anymore,” Millie reminded him. “I can take care of myself.”

“Really? It certainly didn’t seem like it when I had to send my carriage for you last week when your so-called friends left you at the mercantile to run off and visit that bawdy traveling show.”

“I chose to stay put. Would you have rather I’d gone with them? I knew better than to be seen in such a risqué place.”

Her father signed deeply, and Millie hoped he was about to give in to her request.

“I do appreciate your wise decision, but who’s to say you’ll make the same one the next time. Now that your mother is gone, I worry about your insistence on independence. I... my firm... has a reputation to uphold. I can’t have my twenty-year-old daughter running around unchaperoned.”

“That’s it, isn’t it?” Millie asked. “You’re not worried about me. You’re only worried about how my behavior will reflect on you in the eyes of your stuffy clients.”

“I’m smart enough to admit I don’t have the foggiest idea how to raise a daughter. That was always your mother’s job. I don’t want to worry about you while I’m away on business. You’re too old for a nanny, and I refuse to burden my household staff with more work.”

“So, your solution is just to ship me off to relatives?”

“I thought you loved your uncle Malachi and aunt Rebecca. You always seemed to enjoy their visits.”

“I do. Of course, I do. Mother doted on her big brother, and was quite proud of the fact he’d become a minister.”

“That’s another reason I’m sending you to them,” he told her. “It’s a much more respectable life—living with a reverend—rather than running with your school chums here in Chicago.”

“How will I get there? You’re obviously too busy to take me. Surely you don’t intend to let me ride the stage on my own.”

“I do not. Your cousin, Billy, and his fiancé, Caroline, will be coming here to get you. Caroline’s older sister is coming along to chaperone. They’ll arrive a day early and do some shopping, then meet us at the coach station so the three of you can return to Maryvale together.”

“Maryvale,” she repeated. “It sounds so quaint. I’ll be bored,” Millie announced boldly. “To tears.”

For the first time since her father had told her of his plans, he snorted an outright laugh. “Knowing my headstrong and independent daughter the way I do, I have a feeling you won’t stay bored for long. As a matter of fact, I almost feel sorry for the people of Maryvale, as well as the entire state of Missouri.” 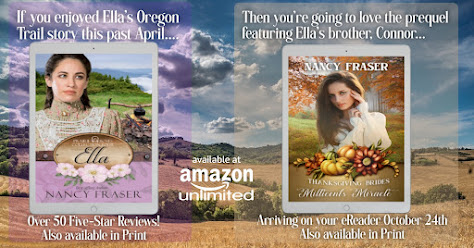 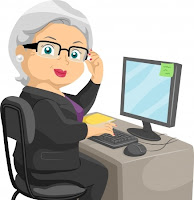 Nancy Fraser a Top 100 best-selling and award-winning author. She is the 2022 winner of the NEST (National Excellence in Story Telling) award for her western historical romance, An Honorable Man for Katarina.
She's also the granddaughter of a Methodist minister known for his fire-and-brimstone approach to his faith. Nancy has brought some of his spirit into her Christian romances. And, her own off-beat sense of humor to her clean & wholesome books. 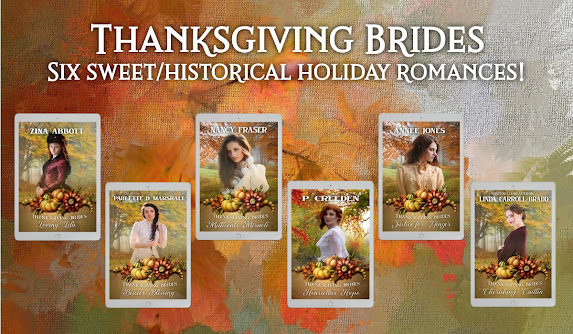 Thanksgiving Brides is a six-book series from some of your favorite authors. You can find all of the books in the series on Kindle Unlimited
~ ~ ~
Thank you for stopping by. Please come back again soon.
Blessings,
Nancy
at October 24, 2022