Next, we will be looking at book 2 in the series, A Maze of Love by Author Lynn A. Coleman. 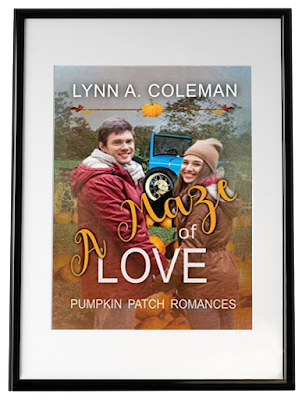 Tara Cabrera loves working on the family farm that’s been in her family for a hundred & fifty years. Nothing gets her more excited that being a part of the maze at the town Fall Festival each year. Thankful that her family farm can supply the bales of hay needed for the maze.
At his cousin’s urging, Derek Tucker designed and won a Maze for his cousin’s hometown Fall Festival. He and the mayor decide to change the actual location of the maze, much to Tara Cabrera’s displeasure. Unfortunately, she sways the mayor to put it back in the site it’s been in for years. Not happy with the change, Derek grumbles and complains to the attractive woman who delivered the hay. She disconnects the trailer and leaves it for him to unload.
Tara learns from her oldest brother Andrew that Derek is similar to Andrew and isn’t a people person. Feeling the need to apologize, she returns to the town square and helps Derek build his maze.
Derek realizes that no matter how careful he is, he always says the wrong thing to Tara Cabrera. Derek has an intense panic attack when his cousin is a total no-show for helping and working on the maze. Tara finds him hidden in the maze and helps him recover.
The friction between them changes when he goes to her family farm and helps harvest some of the pumpkins. Love finds them in the pumpkin patch. The only question is can they work out the pathway through the ultimate Maze of Love?
Available exlusively on Kindle Unlimited

Once in town, Tara backed the trailer adjacent to the designated area where the maze was to be built. A man with a clipboard came up to the side of the truck. “Bring it back over there,” he ordered, and pointed to a different location.

She’d never seen this guy before. Didn’t he know that she’d been doing this for the past ten years? Okay, maybe not driving the truck and trailer in—but still, she and her family had been donating hay and helping to build the maze every year. She rolled down the window. “Who are you?” she asked. 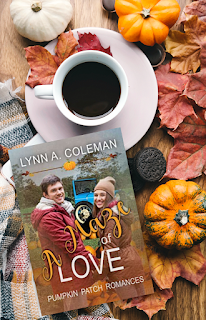 “Derek Tucker. I’m this year’s designer of the maze.”

“Woo-hoo for you,” she quipped, then stopped herself from getting even more upset with the new guy. “We’ve been delivering the hay for the past ten years.”

“Oh, okay, thanks. You can unload it over there.”

She raised her eyebrows, fuming inside, but held her tongue and backed the trailer into the spot where they had always unloaded the hay.

“Hey, I said to unload it over there!” he barked out.

“The maze is built here,” she snapped back, “therefore we unload the hay next to where it is being built, making it less work for all involved.”

“No. I changed the location to over there.”

“What? Why?” Who was this guy and what was he doing here?

Mayor Larson came over and extended her hand. “Tara, thank you for your family’s contribution again this year.”

“You’re welcome, Mayor. However, there seem to be some alterations going on. This man is saying he moved the location of the maze?” she said, questioning the mayor’s wisdom in allowing such a change.

“Yes. He felt people could watch from the second floor as folks try to make their way through the maze.”

“You mean to stare down at them and make fun at them?” Tara asked.

Mayor Larson’s eyebrows pinched together. “I hadn’t thought about that. You’re right, Tara. Let’s build the maze in its usual spot.”

The man took off his hat. A cascade of curls bounced on his head. “Mayor Larson, we discussed this.”

“And I wasn’t thinking about the potential of less-than-favorable comments coming from spectators in the building. Tara’s right, the location we’ve always used is best.” The mayor walked away.

The man glowered at her. She ignored him and went to disconnect the trailer from the truck.

Lynn has been writing Christian fiction for over twenty years. She founded the American Christian Fiction Writers. ACFW She’s been serving with her husband as a pastor’s wife for over 40 years. Together they have three children, one now lives in glory. And have eight grandchildren and recently became great-grandparents.
Her interests and hobbies apart from writing are genealogy research, and recently added gardening and raising some ducks, chickens, rabbit. Not to mention the family dog. She also likes photography and travel.
Lynn's Website ~ Facebook ~ Twitter ~ Amazon Author Page

You can find the entire Pumpkin Patch Romances series on Kindle Unlimited
~ ~ ~
Thank you for stopping by. If you haven't seen it yet, please scroll down for my earlier post from today, the fourteenth (and last) book in the Last Man Standing series, KREW by Author Farrah Lee.
Blessings,
Nancy
at September 19, 2022