Next, we will be looking at book 3 in the series, Harvest Moon Kisses by Author Linda Carroll-Bradd. 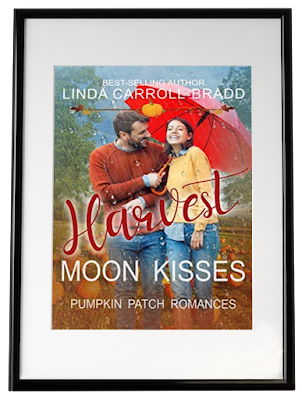 For the past four years, Tamsyn Norwood has operated the family’s pumpkin patch and corn maze. Although the business barely breaks even. During college, she spent a glorious night in a pumpkin patch with her boyfriend. Sadly, that relationship didn’t last, but she has worked hard to recreate the special feeling for others. If the patch income doesn’t improve by November first, her father threatens to plow the acres for a cash crop. She works herself ceaselessly to come up with supporting activities to keep the business going.

Ex-professional football player Harper Ashton is in town visiting an old college buddy. Released from his team because of an injured elbow, he’s at a crossroads over what comes next in his life. Life in this small town is nothing he’s ever experienced, and he soaks in the sense of community. He crosses paths with a college sweetheart, and suddenly, he has a new goal. Maybe his marketing degree and his famous name will help her struggling enterprise.

Working together reminds them of their college years. But can they recapture a love under the harvest moonlight?

The Texas air hung hot and humid as Tamsyn pounded up the exterior steps to her garage apartment at the same address where she’d lived since birth—her delivery taking place in her parents’ master bedroom. Darn the stupid summer highway work and the detour that cost her and every other driver at the east end of the county an extra twenty minutes. She dashed into the living room and adjusted the temperature on the window air-conditioner, kicking the fan to its highest speed. 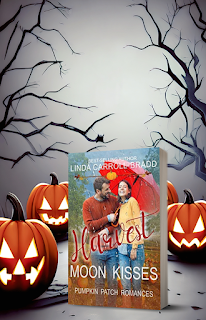 Holding her arms straight out from her body, she stood in front of the unit’s vents, letting the cool air chill her heated skin. Only thirty-seven minutes before she was due downtown at Norwood Enterprises for the weekly budget meeting. Closing her eyes, she though of her late mother’s recipes in the tole-painted wooden box on the counter. None of them could be mixed and baked within twenty minutes.

A rebellious though niggled. Why was she responsible for bring a baked treat to the meetings with her father and two brothers? She’d started the habit four years ago when she became the manager of the family’s pumpkin patch. That first day, she’d wanted to celebrate. She saw the job offer as a sign of faith that Dad trusted her abilities. Since then, because she was a people-pleaser, she’d just continued the practice. Not once had anyone else offered to make a stop at a bakery. 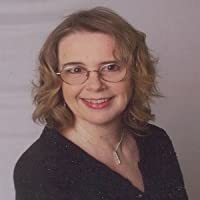 As a young girl, I spent lots of my free time lying on my bed reading about fascinating characters having exciting adventures in places far away and in other time periods. In later years, I discovered and devoured family saga stories and romance novels. At a certain point, I grew cocky enough to think I could write one of these stories. Then I learned what a balancing act writing a novel is, but I wasn’t deterred. Twelve years later, my first fiction sale was achieved--a confession story.

After reading Debra Holland’s “Montana Sky” series and Caroline Fyffe’s “Prairie Hearts” series, I wanted to try my hand at historicals. I was thrilled to be invited to contribute to Sweetwater Springs Christmas and continued writing in the Montana Sky world by developing my Entertainers of the West series.

Married with 4 adult children and 2 granddaughters, I now write heartwarming contemporary and historical stories with a touch of humor and a bit of sass from my home in the southern California mountains. Lots of my stories are set in Texas where I lived for a dozen years.
Linda's Website ~ Facebook ~ Amazon Author Page ~ Goodreads

You can find the entire Pumpkin Patch Romances series on Kindle Unlimited
~ ~ ~
Thank you for stopping by. Please come back again soon for the next book in this series, Harvest Hearts, by Author Nancy Fraser.
Blessings,
Nancy
at September 27, 2022